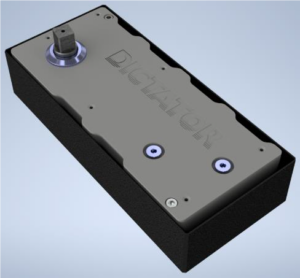 Since the 1950s, the WAB 180 has been produced with a sand cast housing. At the time, this was certainly the ideal solution.

But it no longer corresponds to the current state of the art.

Moreover, we at DICTATOR Berlin now have a machine park that enables us to manufacture the housing completely ourselves. 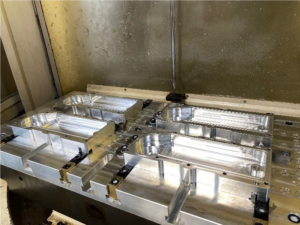 This is accompanied by some significant improvements:

– The new housings have a consistent manufacturing quality with very low tolerances, as they are produced entirely on our CNC milling machine. There is also no longer any risk of blow holes.

– Sealing between the two halves of the housing was difficult with the previous sand cast housings because the groove for the sealing cord was not always evenly worked out. With the new housing, the seal seat is always the same. Therefore, it is possible to work with a sealing ring. With the sealing cord, minimal gaps could occur where the two ends met if the gluing point was not done correctly. This gluing point is now omitted and thus a permanently secure sealing of the housing is achieved.

– A new, improved seal is used for the oil filler and adjusting screw. In addition, a larger clearance has been created around the screw heads so that any dirt can be easily removed before opening the screws. Furthermore, the hole in the cover plate above the adjusting screw is additionally closed by a plastic plug to protect the screw from dirt.

– Much easier installation of the floor spring in the embedding box 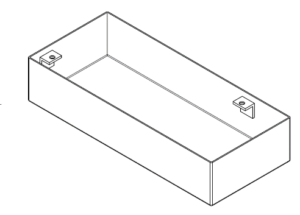 Previously, two brackets were welded to the top of the embedding box, to which the floor spring was screwed.

In the new embedding box, there are two weld-on bolts on the bottom of the box to which the WAB is screwed. So, that it is no longer necessary to pay attention to the two brackets when inserting the closer into the embedding box. This also automatically positions the floor spring correctly in the box.

– The casing is marked with the DICTATOR logo, so that the manufacturer is always obvious at first glance, even without a label.

– All WAB 180-2 are now generally supplied with the axle bearing for up to 600 kg. This has primarily to do with a simplification of stock-keeping.

What does the changeover mean for you and for the customer?

The change to the new version is not without a small “but”. For technical reasons, the dimensions of the WAB 180-2 differ slightly from those of the previous WAB 180. The outer dimensions are identical, but the position of the axle is slightly offset, so that WAB 180 already installed can no longer be simply exchanged without also removing the embedding box. The WAB 180-2 is also 1.5 mm higher than the WAB 180.

Even if our floor springs WAB 180 have a very long service life, they still have to be replaced at some point. In order not to make the replacement unnecessarily complicated, we offer a slightly modified housing for these cases, which can be installed in the old existing embedding boxes.

Why don’t we use this housing in general then? The production of the “replacement housing” is considerably more expensive, as some additional milling steps are needed. This would unnecessarily increase the price of all closers. Therefore, we have decided on this solution with an additional exchange variant. 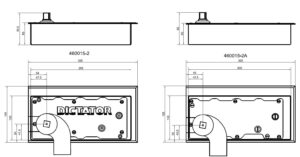 – Cover plates: The cover plates also differ from the previous cover plates with regard to the mounting holes and the recess for the axle. They are also supplied for the new WAB 180-2 with a “-2” after the article number.

Note on the WAB 180-2A for replacing the old WAB 180: The old cover plates will continue to be supplied for it. In the future, we will only supply the cover plates in stainless steel or brass, as the aluminium version was almost never sold.

– Fittings: all levers and hinges can be used for both the old and the new version

– Some WAB 180-2 DIN left have already been delivered, as there were no more housings available for them.
– For all new orders, the new version will be delivered with immediate effect.