The LD radial damper gets even better

By now the LD radial dampers have already been used thousands of times without a problem. As a result, occasionally certain points come to light, in which minor changes can be made to improve the quality even more, as well as to avoid errors in the assembly, or adjustment of the damping force.

Mechanical stop for the adjustment screw in the housing in the Open direction (minimum damping) - since September 2020.

This makes it much more difficult to excessively tighten the screw and thus damage the adjustment screw.
This change was triggered by the fact that, in rare individual cases, some installers have handled the regulating screw with excessive torque. Until now, the screw was much harder to turn until it nearly completely reached the open position.

If the screw was then forcibly tightened further, the regulation got damaged and it was no longer possible to repair the damper. In most cases, the stop prevents the screw from being over-tightened, unless it is done absolutely carelessly. The reduction of the adaptability in the range of minimal damping caused by the stop has virtually no effect in practicality.

Reinforcement of the sealing rings

Since some manufacturing tolerances can still occur even with plastic injection molding, slightly stronger sealing rings are now used for sealing the housing halves, which compensate rare tolerance peaks even better.

The purpose of the integrated temperature compensate in the damper is to balance out the difference in volume of the oil at high (higher volume) or low (lower volume) temperatures. Previously, a PUR foam was used for this compensation. However, under unfavorable conditions it could happen that the cellular foam would not completely return to its original shape when cooled down, resulting in a somewhat reduced damping performance.
From now on all LD are delivered with a sponge rubber or silicone foam. Both materials are not affected by prolonged deformation and always return completely to their original shape.
This temperature compensation is important for the radial dampers because the silicone oil used here is very viscous at room temperature; the thicker the silicone oil, the greater the effect of a temperature change on the volume. 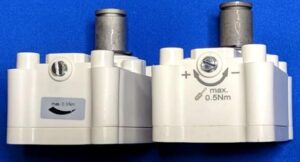 Lasering instead of label

Another improvement was also implemented last year: instead of using labels, the batch number and "adjustment instructions" for setting the damping - with max. torque - are now lasered onto the housing.

Due to the new volume compensation and the modified seal, extensive test series have been carried out again. Additionally, a new testing device was built to measure the torque directly at the axis of the radial damper, see photo on the right. 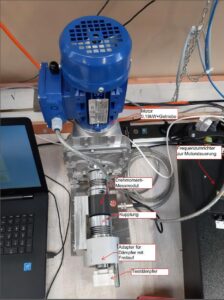 Upper range: the maximum damping force in the new diagrams is lower than the value given in the previous catalogue pages. This is due to the fact that this time we have carried out a whole series of measurements and represent the resulting average value in the diagram.

The measurements on which the first diagrams were based depicted the maximum values that could actually be achieved.

Lower range: due to the mechanical stop
of the regulating screw in the OPEN direction, the damping force in the lower range can no longer be set quite as low as before.

The new diagrams can be found in current catalogue documents here.

Neither of these "restrictions" pose any problems in practice. However, with the new diagrams, we additionally prevent customers from using the LD in borderline ranges, which could lead to problems under continuous load.

In the updated catalogue pages, we also explicitly point out once again that the values on which the diagrams are based were determined in a standardized test environment.